A HISTORY of MOORE PARK
And The Centennial Parklands 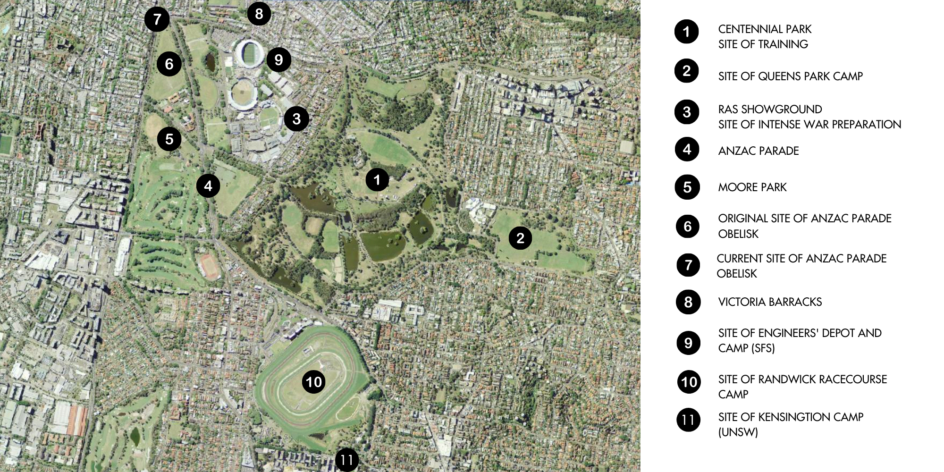 It is hard to imagine that just over 100 years ago, between 1914 and 1919, it was a hub of intense and varied activity as men, who responded to the call-up to join the Australian Imperial Forces (AIF) in the First World War, were brought to various depots and camps radiating from Moore Park to train and prepare for war.

Troops were constantly coming and going to Moore Park. Some were assigned to the Engineers’ Depot, which was on Moore Park Road where the new stadium is being built.  Engineers, signalers, wireless operators, and other, practised building bridges, pontoons and wireless towers and underwent cavalry practice in Centennial Park.  Regular social events were held at the Depot.

The RAS (The Royal Agricultural Society) Showground was also the scene of intense activity and “was occupied by cavalry, artillery and transport at different times and large numbers of army horses were stabled and broken in there. Men came from around the country for special courses or officer training. The vast majority of servicemen, however, were in transit, departing to or returning from battlefields.”

There were several camps where troops were billeted.  There was a camp at the Engineers’ Depot, sometimes referred to as the Moore Park Camp; at the Showground; at Randwick Racecourse; at Kensington Racecourse (now the University of NSW); at Rosebery Racecourse and the Malabar Mobilisation Camp.  There seems to have been a small camp at Victoria Barracks.

There was also training at Randwick Barracks rifle range (now part of the Environmental Park) and the Malabar Mobilisation Camp (now the Anzac Rifle Range). There were daily exercises around the camp sites and troops went for long route marches through surrounding suburbs and the city.

Wherever the troops exercised, trained and were billeted, they assembled at Moore Park for troop reviews, to give displays of trench warfare for the public and to be farewelled prior to departure.

The first troops to depart were from the First Expeditionary Force and were deployed to German West New Guinea.  Relatives and friends gathered at the northern end of Moore Park to bid them farewell as they marched from here to board their ships at Woolloomooloo.

In 1917 when Randwick Road, which bisects Moore Park, was renamed Anzac Parade, a

commemorative obelisk was erected at the northern end adjacent to Moore Park which,

with the Memorial Grove of Trees became known as the diggers’ own memorial.

In 1998 (circa) the Obelisk was moved approximately 330 meters south to allow for the construction of the Anzac Parade portal of the Eastern Distributor and in 2014 it was removed to protect it from the construction of the  Albert Tibby Cotter Bridge, a pedestrian bridge built primarily to cater for crowds coming from and going to the Sydney Cricket Ground and the Sydney Football Stadium.

In 2017, the Centenary of the naming of Anzac Parade, it was relocated to its present position in Moore Park.   A commemorative Aleppo pine was planted nearby in 2019.

All that is left of that memory is enshrined in the re-located Obelisk, the Aleppo Pine nearby

and, recently, at an annual Dawn Service organised and attended by local residents.