In 1917, the Anzac Memorial Obelisk was constructed by Sydney City Council at the head of Randwick Road which had been widened and beautified with a central flower bed through the Moore Park precinct. The thoroughfare was renamed ‘Anzac Parade’ by the Lord Mayor of Sydney and opened in association with the dedication of the Anzac Memorial Obelisk to honour the ANZACs in the aftermath of the Gallipoli campaign.

road the best name in the English language at the present time.

It was proposed that the memorial route would eventually run to La Perouse.

There were already many trees lining Anzac Parade.  When the road was redesigned along more formal lines,

the original trees were preserved and new ones planted as befitted a commemorative site. 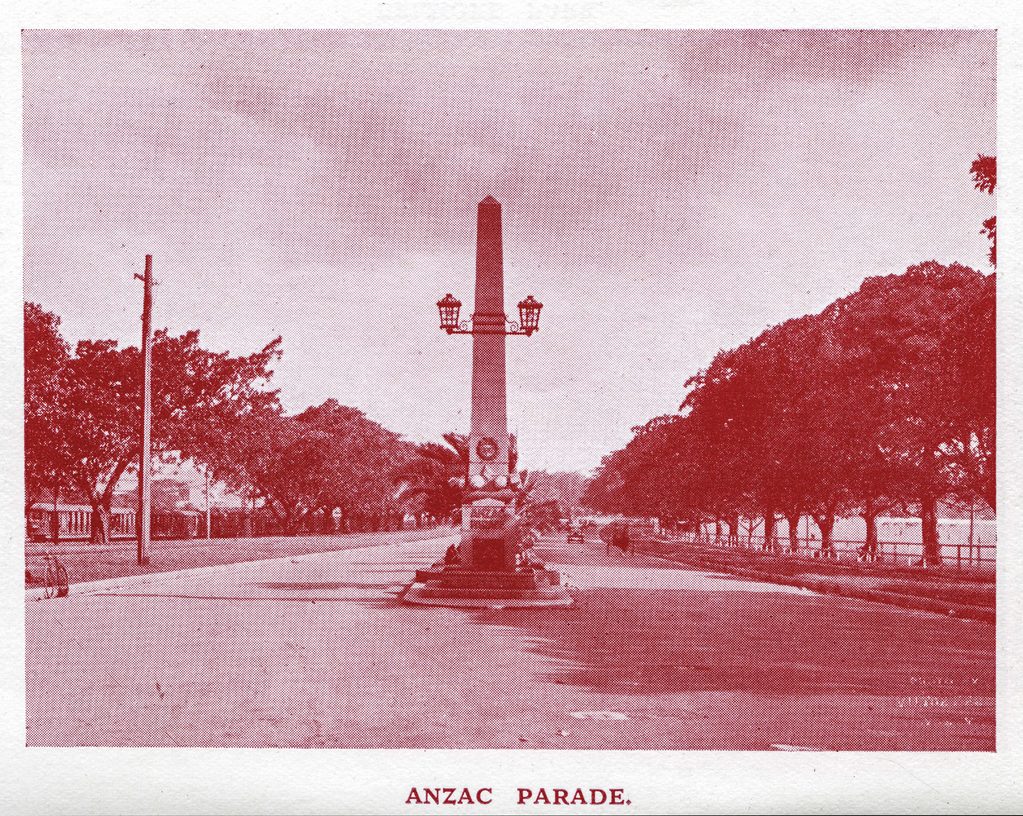 In February 2017, Randwick City Council resolved ‘… to endeavour to restore and recreate the

ANZAC Parade corridor as intended.’ A heritage study was commissioned and can be downloaded here:

There are many other monuments along the length of Anzac Parade in memory of those who served and died in World War One as well as in World War Two and the Korean War. There are also many sites of significance which tell the stories of local events that took place before, during and after World War One.  However, they are now largely forgotten.

It is hoped this site, which relates particularly to World War One, will help people appreciate the local history surrounding Anzac Parade.  Such knowledge may help people relate more easily to the history of the war and to appreciate the implications for those who served overseas as well as the impact on families holding the fort at home.

The story of Anzac Parade is not the only forgotten story.  There are far older ones which should not be forgotten either – most importantly, that of the Gadigal people on whose ancestral lands more recent events took place.  The route had evolved from a network of ancient Gadigal pathways which in the 18th century were also used by Europeans who sailed into Botany Bay and ultimately established a colony in Port Jackson near what we now know as Circular Quay.  The Europeans used the Gadigal’s paths to explore the area and then with constant use appropriated them, particularly those connecting Sydney’s back door (Botany Bay) with the principal settlement they established at Sydney Cove.

‘…. the desire to make sense of ourselves includes the need to place

ourselves into a narrative – of our own lives, our family histories and our cultural identities.’

The research on this website has been made possible with two grants from the NSW Veterans Affairs ANZAC COMMUNITY GRANTS PROGRAM.  The first in 2018 and the second in 2021.

The section on the History of Moore Park is also featured in Stories of New South Wales War Memorials Register.

This obelisk (1917) is significant as being one of the earliest monuments dedicated to the role of the Anzacs of WWI, preceding the Martin Place Cenotaph (1927) and the Hyde Park War Memorial (1934). 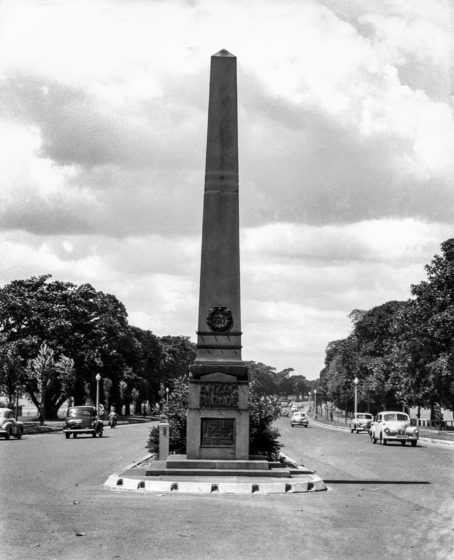 Based on its historic and social significance, and the high esteem in which the Australian community holds the memory of the Anzacs, the obelisk is assessed as having state significance. 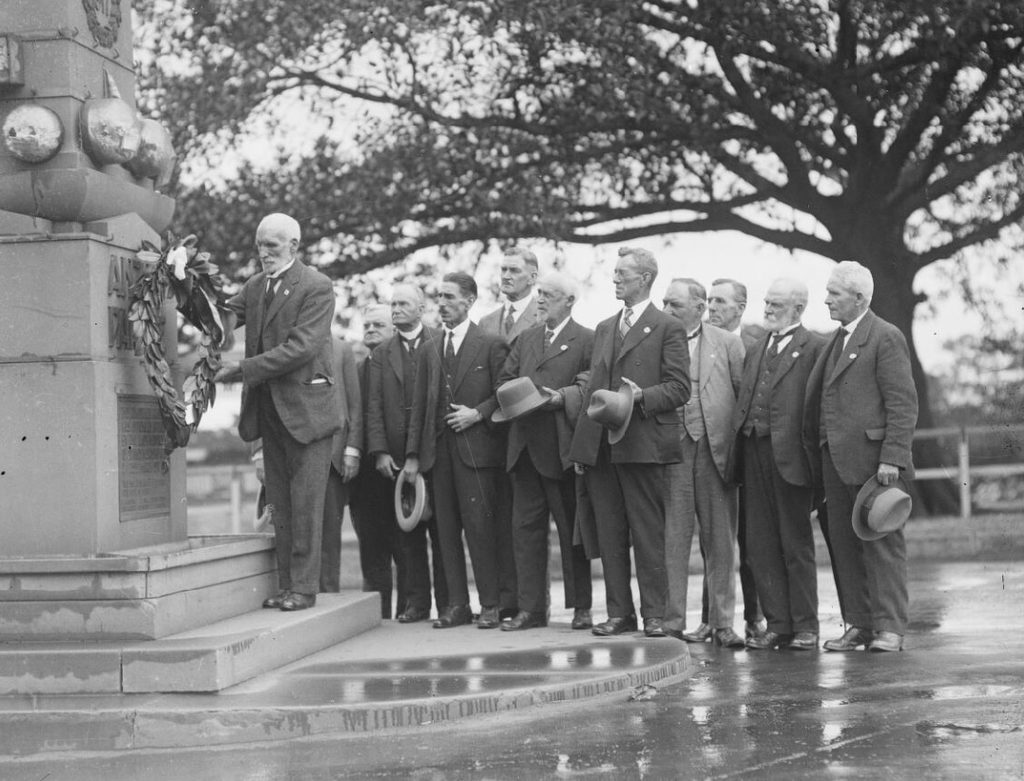 A year before the cessation of the First World War, returned soldiers and their families began to gather at the Obelisk to remember the fallen and an annual tradition quickly took root. Throughout the 1920s the children and families of the dead would gather to decorate and lay wreaths upon the Obelisk each Anzac Day. It is where the Anzac Day tradition began and grew.

'It has been the custom in former years for returned members of the Second Battalion to hold a service at the memorial on Anzac Day, but this year all the members joined the larger function in the city.  In the afternoon, without ceremony, they laid the customary wreath at the memorial.' 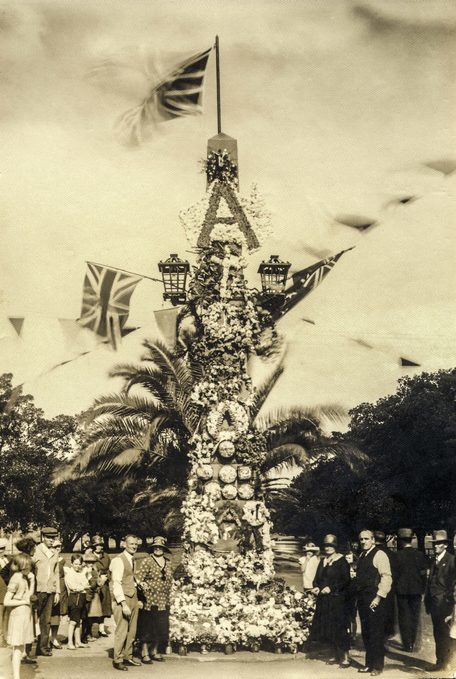 'As with all outdoor ceremonies the observance of the days significance at the Memorial Obelisk, Anzac Parade, was somewhat marred by rain.  There was however a representative gathering of relatives and soldiers (many of the latter maimed).

'A number of soldiers mostly from the First Infantry Brigade, mustered at Darlinghurst Junction and under Lt Jackson marched behind a Boy Scouts band to the monument.  Here, in a brief address, Lt Colonel A.B. Stevens, who commanded the 2nd Battalion at Gallipoli, recounted the now historic movements of the Australian force from the time of its departure from Australia at the landing at Anzac Cove.' 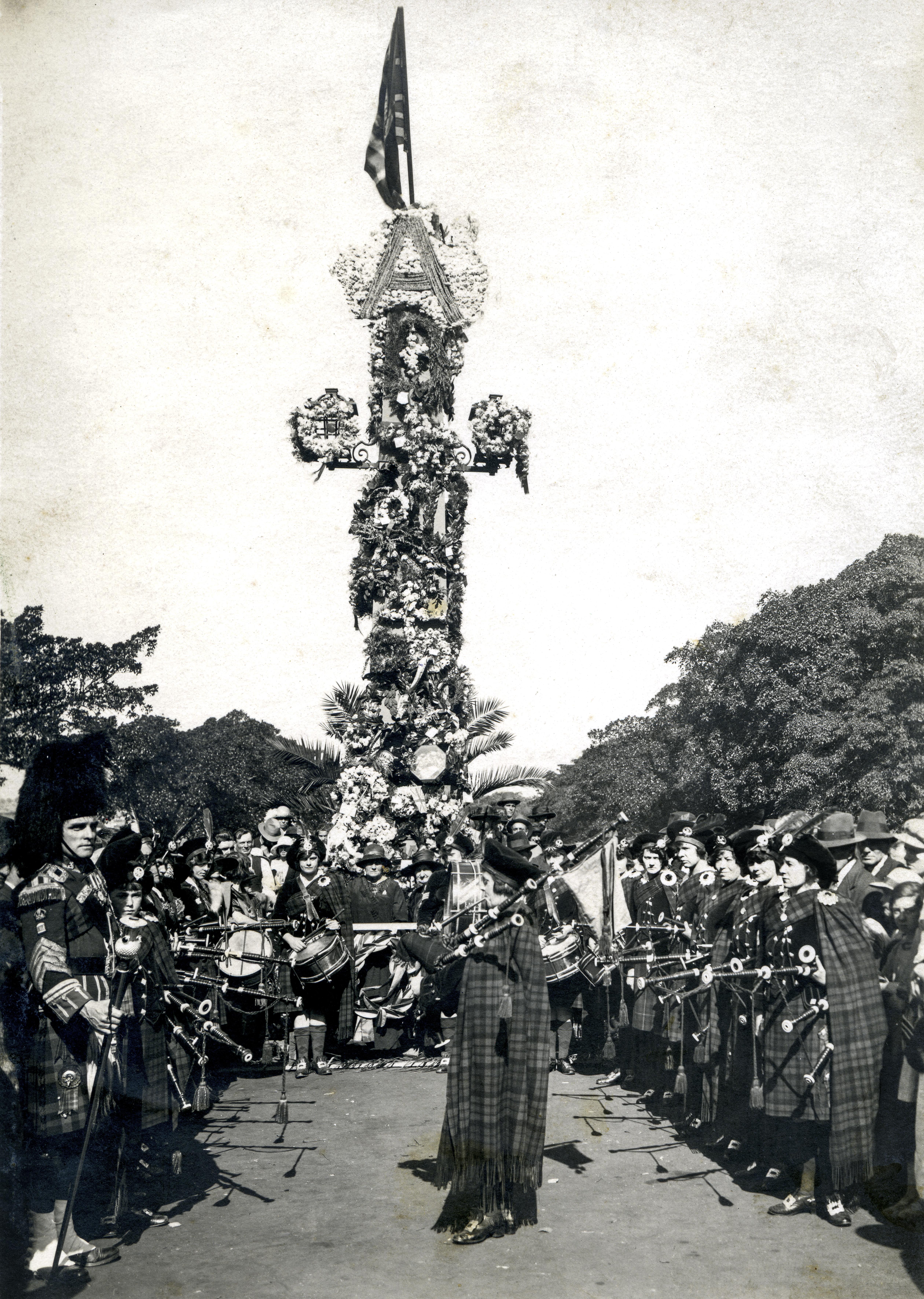 'The obelisk, forming the main feature of the monument, was decorated with wreaths and flowers, and presented a beautiful and inspiring spectacle.  Surmounting it was a magnificent representation of the map of Australia, consisting of massed white chrysanthemums, upon which was emblazoned in purple clover blossoms the significant “A”.  This symbol, as in past years, was made by the pupils of the Long Bay Public School.

'At the base of the obelisk, floral tributes were piled, every one bearing a card on which written words conveyed the sorrow and pride of relatives of a dead soldier.  Some cards were in memory of a battalion, others the mingled emotions of Australia.

'On account of its central position, the obelisk was the goal of many a pilgrimage from the city and neighbouring suburbs throughout the day,  and late in the afternoon it was a mass of foliage, in which white predominated. With the electric arms also decorated, the monument resembled a white cross. 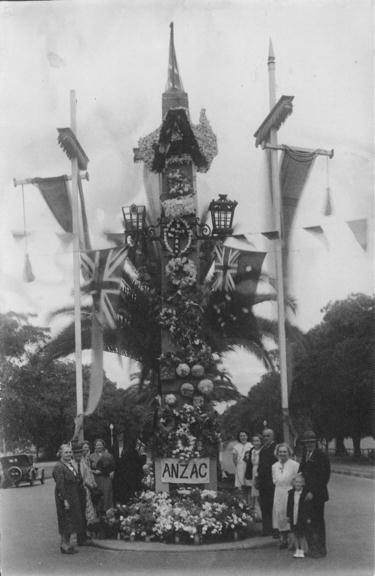 'An interesting feature was the placing of emblems at the foot of the column by little children from a nearby clinic. Led by a couple no higher than the knee of an Anzac helping with the decorations, they marched twenty strong, across the wet roadway, and solemnly placed their tributes on the basal steps.' Sydney Morning Herald, 26 April 1923.

By the late 1920s the big Anzac Day ceremonies were being held in the city near where the official war memorial in Hyde Park was being built. But the original diggers were still returning to their own Anzac Parade memorial.

'The Anzac memorial at the entrance to Moore Park was bright with floral tributes.  As on previous occasions a floral map of Australia formed the apex of the decorations and every inch of the obelisk was covered with wreaths: whilst across the roadway was stretched a line from which fluttered a multitude of silk ribbons, preserved from former occasions.' 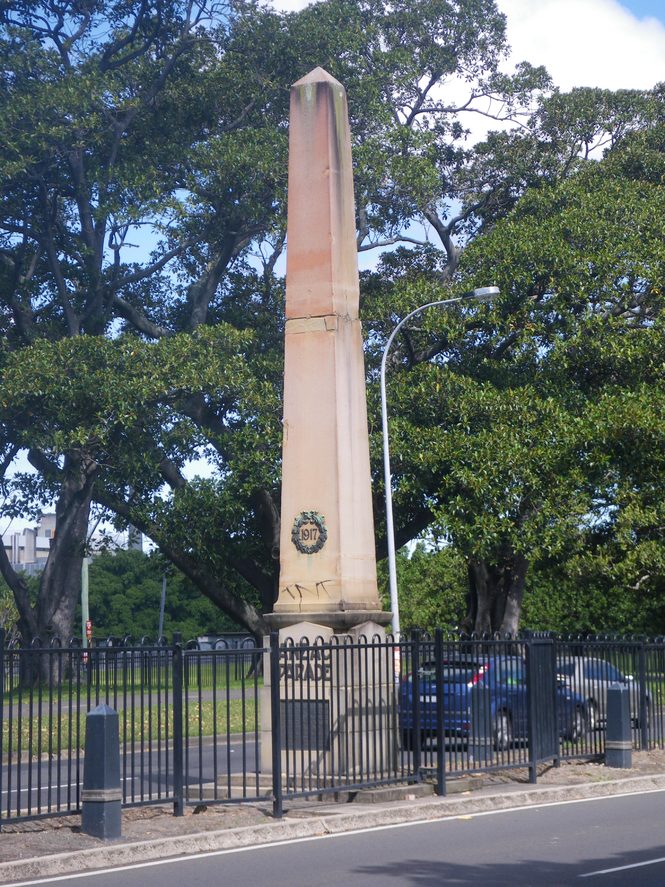 Although their numbers were dwindling the tradition of marking Anzac Day at the Memorial Obelisk continued until the very end for the original diggers.  It was their own memorial – the place past which they had marched as young men and the place to which they had returned throughout their lives, to remember those who had fallen.

The Memorial Obelisk and its history has now been almost entirely forgotten. 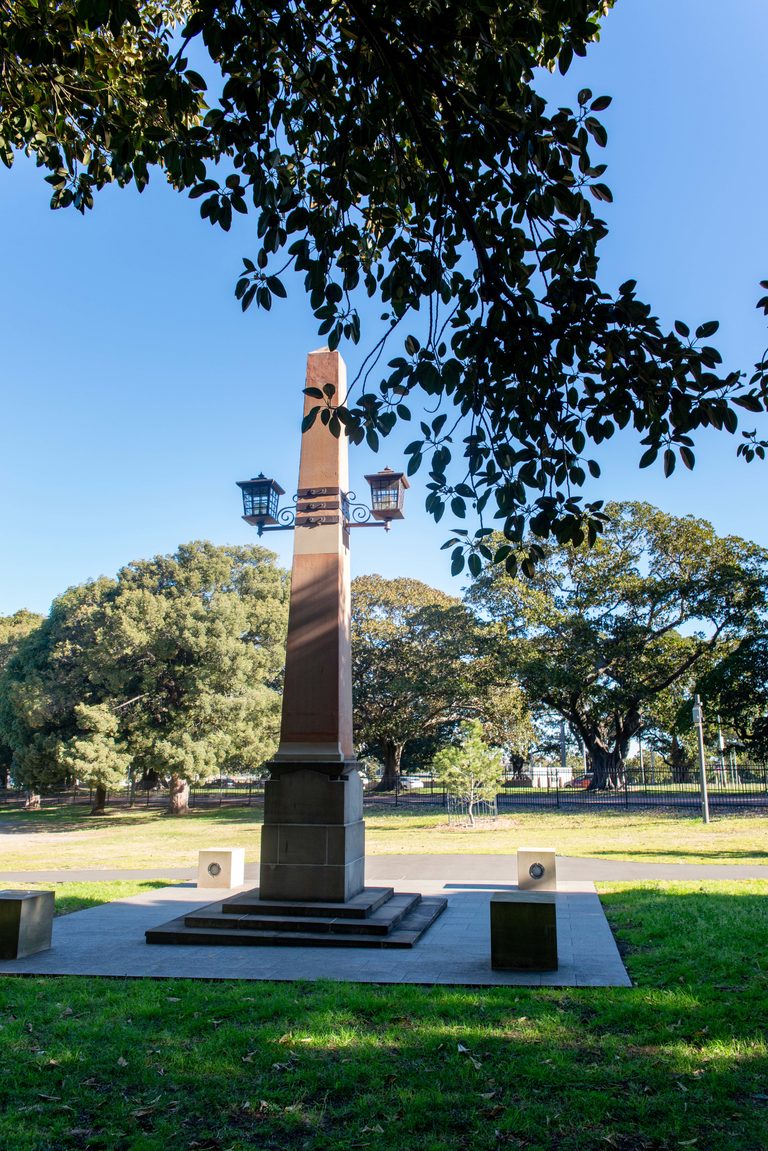 In (circa) 1998 the Obelisk was moved approximately 330 metres south to allow for the construction of the Anzac Parade portal of the Eastern Distributor and in 2014 it was removed to protect it from the construction in 2015 of the Albert ‘Tibby’ Cotter Bridge, a pedestrian bridge built primarily to cater for crowds coming from and going to the Sydney Cricket Ground and the Sydney Football Stadium. 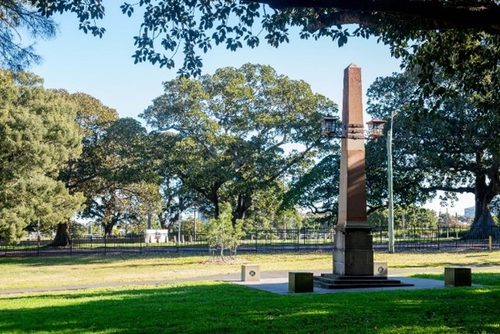 Tibby Cotter was an Australian cricketer who played in 21 Tests between 1904 and 1912 He served with the First AIF, and was killed in action in the mounted charge of the 4th Light Horse Brigade at Beersheba. 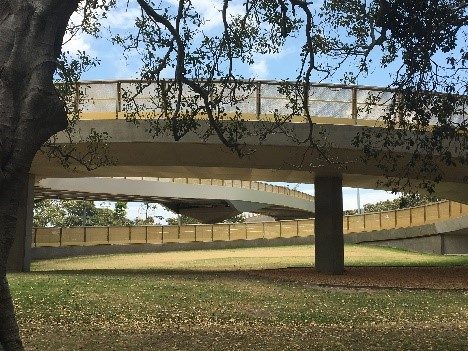 In 2017, at the Centenary of the naming of Anzac Parade, The Obelisk was relocated to its present position in Moore Park.   A commemorative Aleppo pine tree was planted nearby in 2019.

In 2019 another pedestrian bridge was built across Anzac Parade. While the ‘Tibby’ Cotter walkway is used by a small percentage of visitors to Moore Park, it was expected that the Doctor Agnes Bennett Bridge would be better patronised because it links a stop on the light rail line to Sydney Boys High School and Sydney Girls High School - government selective schools on the opposite side of Anzac Parade. 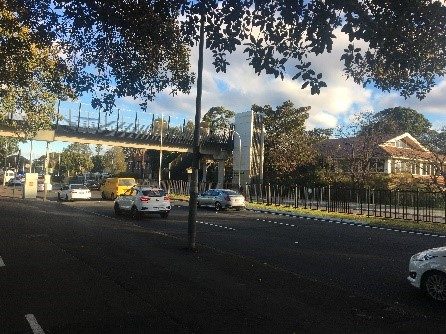 Agnes Bennett attended Sydney Girls High School.  In 1915 she became the first female commissioned officer in the British Army, when as a captain she worked as a medical officer in war hospitals in Cairo.  Wikipedia. 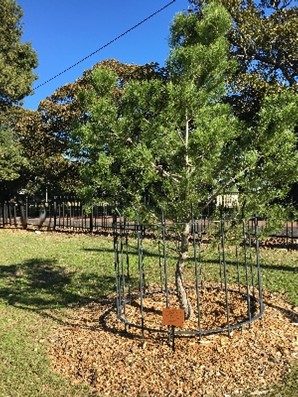 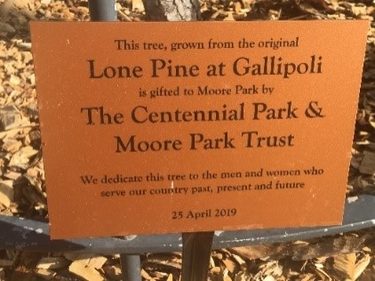 All that is left of that memory is enshrined in the re-located Memorial Obelisk, the Aleppo pine nearby and, a recent annual Dawn Service organised and attended by local residents.

‘ANZAC’ is used when referencing the Australian & New Zealand Army Corps itself and ‘Anzac’ is used in all other circumstances.

Notes About The Site

Daughters of Anzac and Their Families is the name of a website.  It does not represent any formal group of people.