I, like many others, must have driven along Anzac Parade many, many times without realising why it is called Anzac Parade. To my knowledge, its significance was not even mentioned during the commemorations of the Centenary of the World War One in 2014-2019. Nor did I realise that the Centennial Parklands, as they are now called, which include Moore Park, Centennial Park and Queens Park, provided places of training and encampment for those who had responded to the call to enlist for the World War One. It was in Moore Park where the volunteers, not only trained and gave demonstrations of warfare for the public but was where they assembled for review prior to departure to German New Guinea, first of all, and then to other theatres of war. 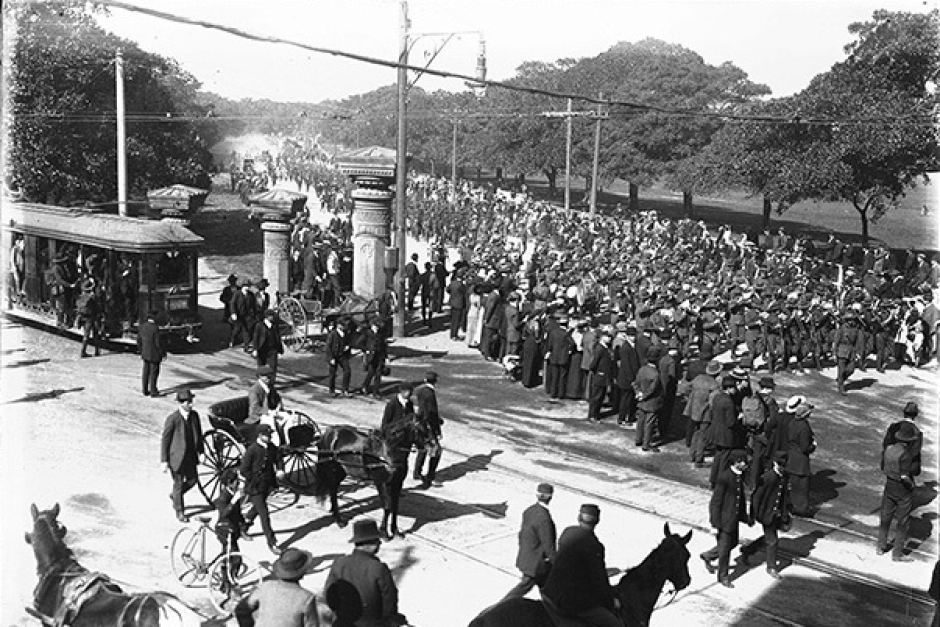 This photograph depicts troops of the Australian Naval and Military Expeditionary Force, marching on Randwick Road for final embarkation on HMAS BERRIMA.  The photograph was taken on 18 August 1914 looking at the corner of what was then Park Road, (now Moore Park Road), looking south along what was then Randwick Road (now Anzac Parade) in the Sydney suburb of Paddington.  The troops comprised a small volunteer force of about 2,000 men, whose purpose was to seize and destroy German wireless stations in German New Guinea.  HMAS BERRIMA departed Sydney the following day, on 19 August 1914, and the troops returned on 16 January 1915.

Read about the reception given to tens of thousands of soldiers: 'Our Troops March Through the City’, The Sydney Morning Herald, August 1914, p12.

I learnt there were camps set up between Moore Park and La Perouse and it was Anzac Parade that provided a route connecting them all.  That route followed closely a very old track used by the traditional owners of these lands – the Gadigal people.  Troops were constantly coming and going to and from Moore Park and to the two surrounding camps – the Showground Camp and the Engineers Depot and Camp.  Later I discovered there were camps on Randwick Racecourse, Kensington Racecourse, Rosebery Racecourse and at Malabar on what is now the Anzac Rifle Range.  Much later I learnt that there was a camp in Queens Park for the Field Ambulances Section of the New South Wales contribution to the Expeditionary Force.  How could I have not known this, living so close by for so many years?  I learnt that the camp had its own butcher’s shop and anatomy lessons were held in the open under the trees.

Following the troop reviews, the volunteers assembled at the northern end of Randwick Road Moore Park, where they bade farewell to family, friends and country – for many it was their final farewell.

This was the place where it all began for so many, including my own father, Robert (Bob) Hope.

One hundred years ago my father was one of those who marched from here down to Woolloomooloo where he embarked on the ship Benalla.  I have all the letters he wrote home during the time he was away from 1916, when he was old enough to enlist, until the end of the war.  I have the first of those letters that he wrote to his mother as soon as he had embarked

A Letter From My Father To His Mother:

Just a line to let you know that we all embarked alright.  I couldn't see you on the wharf.  I didn't get up on deck until the boat was leaving the wharf – we are at present drifting off Garden Island, I think we'll get out about midday.  I think we'll be somewhat like sardines here.  I don't know exactly what sleeping gear we have but should imagine it would be pretty cramped – However, will have to put up with a few discomforts now that we've embarked. ............................  Bob’

Little did he, like so many others, realise that cramped conditions might be the least of their worries but they still must have wondered if they would ever see their families again and this place in Anzac Parade where it all began.

My father was sent to France first and then Belgium where he was responsible for driving teams of horses – which carried the artillery into position on the frontline.  He was one of those fortunate ones who came back – 20% didn't –1 in 5 didn't return, and he marched every Anzac Day for as long as he was able to do so.

No wonder this site resonates so strongly with me – as it would do doubt for many more people if they only knew the significance of it.

It has a sense of place for me like no other and yet it is only recently that these events have come to light for me.  I couldn’t understand why I was ignorant of this history, after all my own father could have walked along Anzac Parade on his way to war.  I determined I would record the events that took place there so they wouldn’t be forgotten.  Over the past four years I have gradually built up a picture of what went on and that my father would indeed have marched along Anzac Parade.  Some of my discoveries were because of chance encounters with people who gave me a fragment of the story, like the story of the Queens Park Camp, and from local newspapers of the day.

I also felt compelled to draw attention to the trees lining Anzac Parade for my mother’s sake.  She would have wept to see what has befallen so many trees.  They really were trees of life to her.

The grove of trees.  A living memorial.

Apart from their highly significant environmental value, trees have symbolic status for us – they have been important in this country in the formation of our national identity, for example, the Burke and Wills Dig tree near Innamincka and the Explorers Tree in the Blue Mountains.  Royalty, politicians and local dignitaries, plant trees on special occasions as a symbolic gesture, the meaning of which differs in different situations – such as a sense of connectedness or wisdom or power.  It is not surprising therefore that our forefathers had the vision to use the already maturing trees along this road as the basis to form a commemorative site to honour those men and women who fought for us in the war to end all wars. 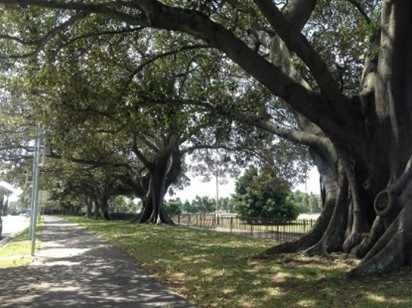 Remembrance involves respect and care.  We should take care to preserve this commemorative avenue of trees, not only for its intrinsic values and heritage but more importantly to respect the memory of the people who went to war on our behalf.  We must let this avenue stand for future generations as a reminder of all those Australians who endured unspeakable experiences in World War One and of the many who did not return. Photo of snaking tram

It is very sad to see the light rail snaking its way between those trees still standing, the trams emblazoned and enveloped with gross and ugly advertising.  I am reminded of William Blake’s words – ‘The tree which moves some to tears of joy is in the eyes of others only a green thing which stands in the way.  As a man is...so he sees.’