He was educated at Sydney Grammar School and afterwards undertook training to become a licensed surveyor.  After war broke out, he had to wait until 1916, when he was just over 19 years old, to enlist for service. He applied to join up at Victoria Barracks and on the 4 November 1916, he received his attestation papers at the RAS Showground Camp. He was encamped at The Warren, Marrickville. 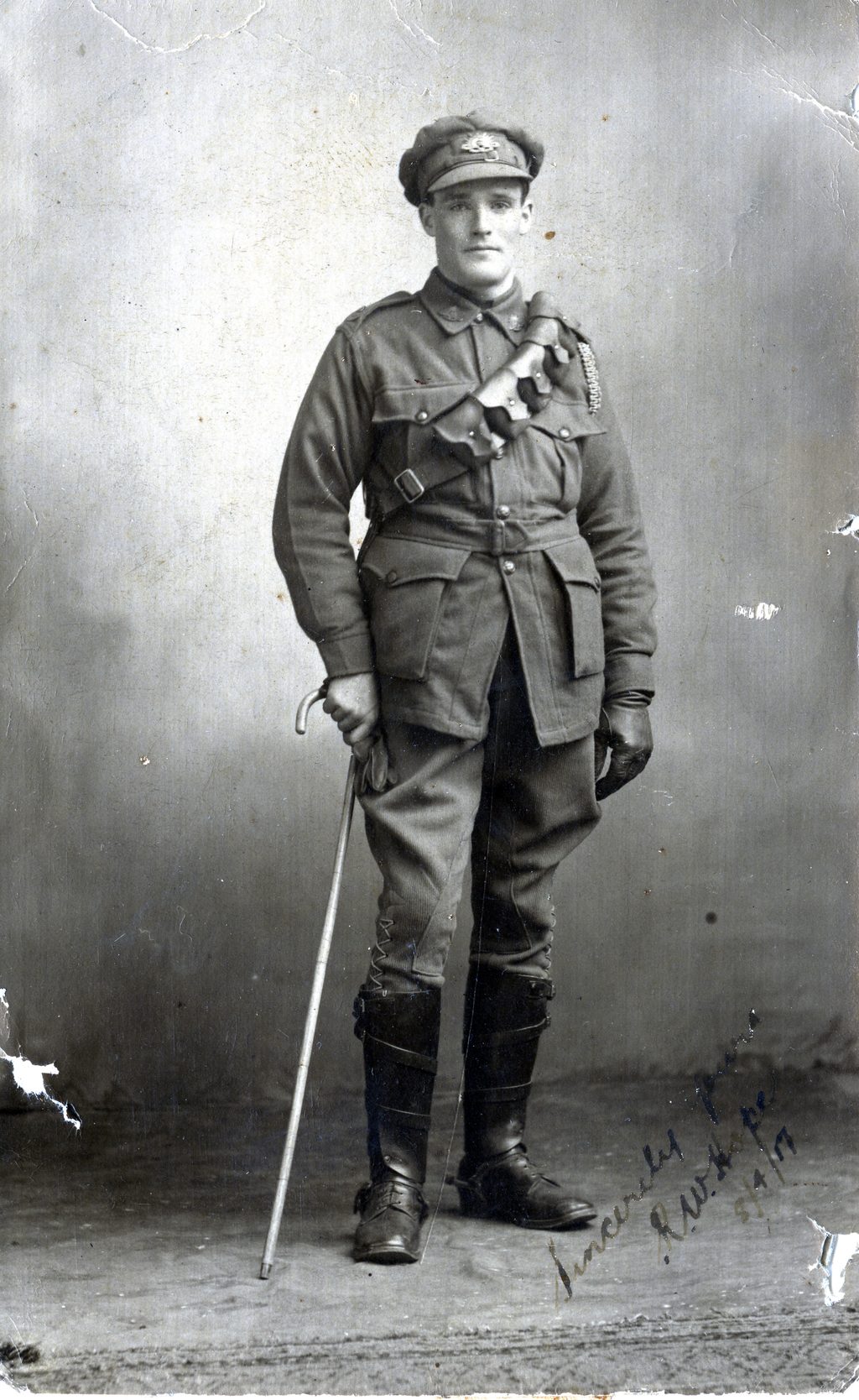 1917.My father in leather riding leggings and the 5-pouch ammunition bandolier across his shoulder – standard dress for an ammunition column driver. Walking stick and gloves were part of the props for studio photos.

Prior to departure, his unit would likely have been billeted for the night, at the RAS Showground.  From there the unit would have marched to Woolloomooloo and in November 1916 sailed for England on the Benalla.   He wrote the first of his many letters home (which I still have) just before the ship set sail.

After several months spent at Larkhill near Stonehenge, on the Salisbury Plains Wiltshire, he was sent to France and then Belgium with the 1st Division Ammunition Column, Australian Imperial Force where he was responsible for the horse and mule teams, – ‘donks’ – as he called them in his letters, which were loaded with shells and then taken to the frontline.  He was based at Ypres, Dernancourt, Hazebrouck and elsewhere until demobilisation. 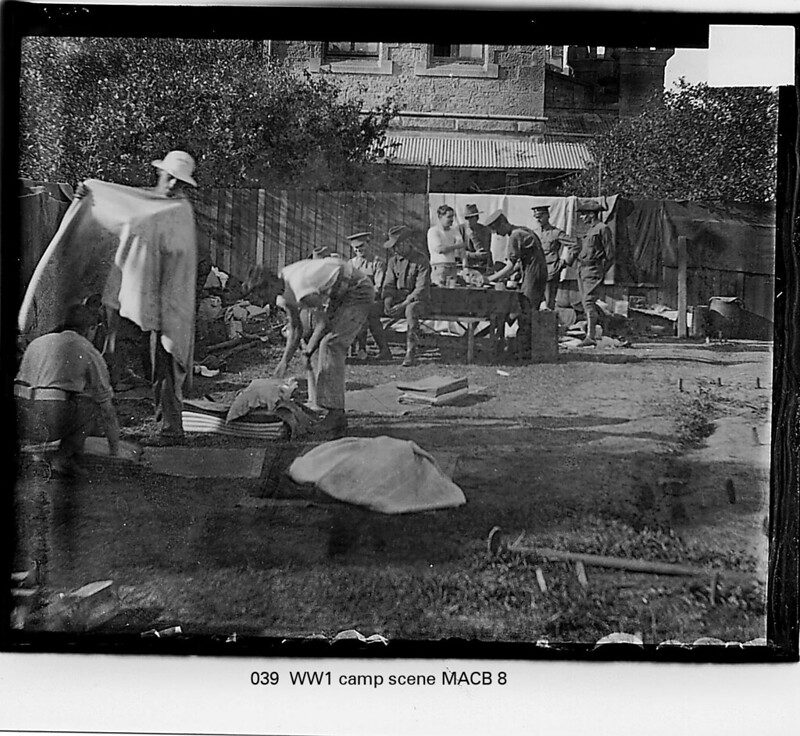 He was promoted to Corporal on 26 April 1919 and discharged 18 September 1919.   He was one of those fortunate ones who came back.

When he returned, he enrolled to study Medicine at The University of Sydney but, for whatever reason, he did not complete first year and went on to become a licensed surveyor.

He married in 1921 and my parents went on to have five children of whom I was the youngest – born at the outbreak of the Second World War, in Quirindi NSW in 1940.

When the depression hit in 1929, my father retrained as a local government engineer and in 1942, during World War II, gave up his work temporarily to volunteer to work for the Australian Government on Defence Construction Works, first at Narromine NSW at the charcoal burning plant, and then in Townsville, Charters Towers and Cairns Qld and Torres Strait.   (Charcoal was used to form an alternative form of fuel which was needed to maintain road transport in NSW during wartime.)

On reading the letters my father wrote home, mainly to his mother (he didn’t meet my mother till 1920), it is interesting to note what he DIDN’T write about, in fact, one could be forgiven for thinking he spent his time in Butlins’ Holiday Camp in the north of England –   such was the watchful eye of the censor. 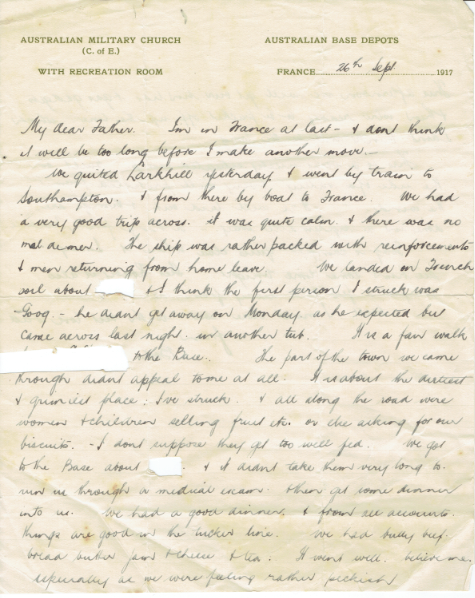 There are some words cut out in his letters, obviously by the censor, and I presume my father learnt very quickly what he could and couldn’t say.  There was a recurring theme though and that was the request for papers from home and fruit cake.  It was only by reading the local papers that the men could see where they had been in France.

There wasn’t ever any discussion about the war in our family but a reproduction of this painting, which hung in pride of place at the front entrance to our home, said it all. 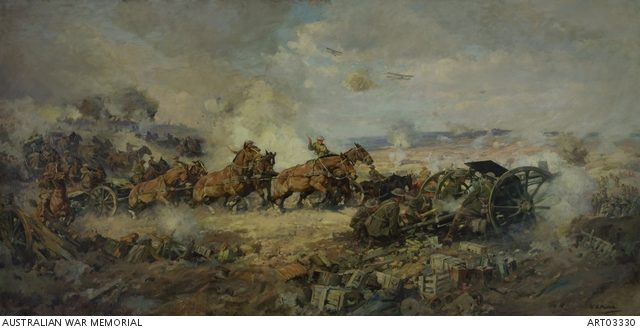 During the First World War, Harold Septimus Power captured some of the last significant horse battles to take place in modern warfare in the paintings he created for the Australian War Memorial, as a war artist.

Although nothing was discussed, I have some memories which have left a lasting impression on me.  When I was about 8 years old, I can remember a neighbour telling my father that he had seen his brother killed beside him at Gallipoli.

When we moved to another suburb, my father used to visit the next-door neighbour occasionally, on the pretext of their having a whisky together, and I sensed that these two men would be sharing memories of the First World War which no-one else would understand or want to hear.  The neighbour on the other side, who died shortly after we moved there, had been a captain in the German army in the First World War.  He and his wife had escaped Czechoslovakia at the outbreak of the World War Two, and I used to hear many stories from the old lady about Europe at the time.  These memories provided important lessons for me.

My father attended the Anzac Day marches every year and would come home late in the afternoon.  It was the only time my mother tolerated his coming home decidedly “squiffy” as she called it.  I think there was a bar on the edge of Moore Park where my father and his cobbers used to gather and reminisce.  I never once heard my father refer to anyone as a mate – they were all cobbers then.

Although there were no serious discussions, my father still managed to convey memories of his time in France and Belgium when he was in a jovial mood, with light-hearted ditties and quips.  I well remember his singing Mademoiselle From Armentières parlez-vous although I don’t remember all the lines and they were probably very different to those he sang at the front. He also had his favourite quips such as referring to Wipers (Ypres) and mercy buckets (merci beaucoup) as ‘thank you’. 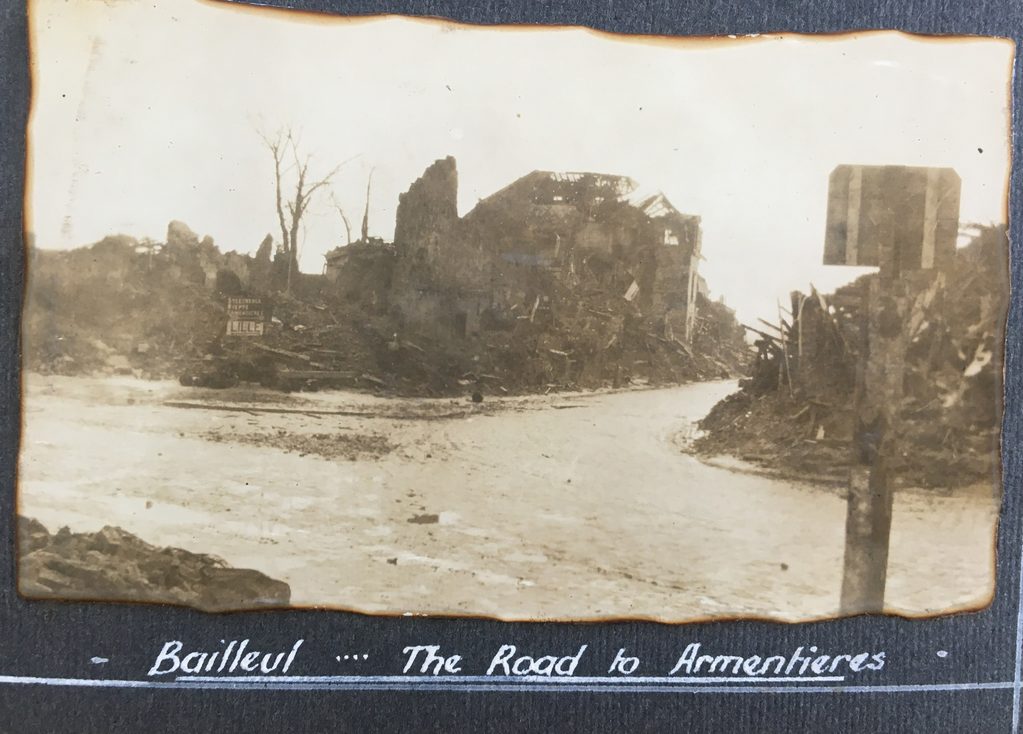 The Road to Armentieres

Taken by my father